Most of the time, when herpes simplex virus or HSV infects a person, there are no symptoms. In fact, it also usually moves from one person to another in the absence of symptoms, so it can therefore it can move through a population silently. Once in a while, though, it can cause symptoms, and typically those are in the form of skin and mucous membrane lesions which can be divided into infections “above the waist”—mostly involving the mouth and tongue, and those “below the waist”—involving the genitals. There are two types of herpes simplex viruses—HSV1 and HSV2—both of which are part of a larger family of enveloped double-stranded DNA viruses: the herpesviridae family. 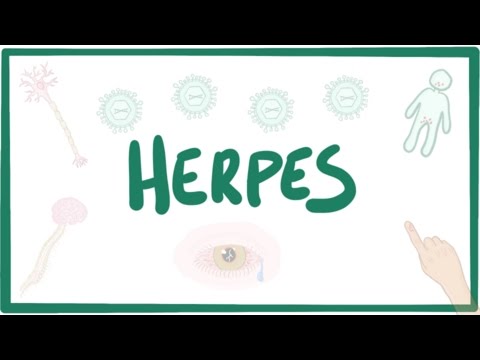 Generally speaking, HSV1 tends to cause infections above the waist and HSV2 tends to cause infections below the waist, but there’s a lot of crossover because both viruses can cause both types of infections. Although herpes is most contagious when there are virus-filled lesions present, it can also spread by asymptomatic shedding which means that herpes viruses can be in saliva or genital secretions even when there are no signs of a cold sore or genital lesion. 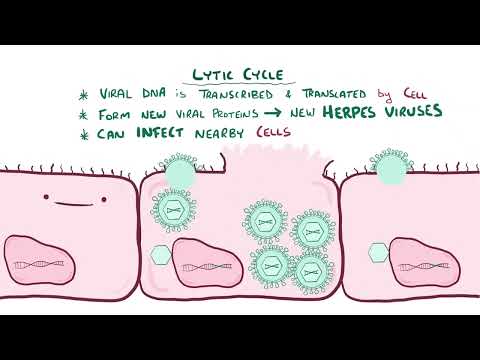 Typically, when herpes virus lands on a new host, in other words a person that’s never had herpes before, it dives into small cracks in the skin or mucosa and binds to epithelial cell receptors, which triggers those cells to internalize the virus. Once inside, the virus starts up the lytic cycle, which is where its DNA gets transcribed and translated by cellular enzymes which help to form viral proteins which are packaged into new herpes viruses which can leave to go off and infect neighbouring epithelial cells. HSV1 and HSV2 also infect nearby sensory neurons, and travel up their axon to the neuron’s cell body to start up the latent cycle. 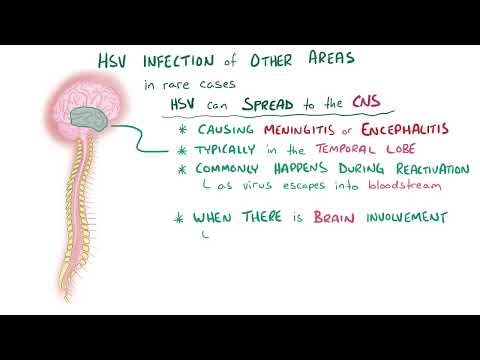 The sensory neurons of the face have their cell bodies in the trigeminal nuclei and those around the genitalia are located in the sacral nuclei. So that’s ultimately where the herpes virus settles in—for life! You see, the sensory neurons aren’t destroyed, instead, they become a permanent home for the herpes virus, and from time to time, the herpes virus makes a few viral copies of itself and sends those virus particles back down the axon so they can get released and infect epithelial cells. Since the trigeminal and sacral nuclei serve just one side of the face or body, herpes vesicles and ulcers develop on the ipsilateral or same side as the affected nuclei. 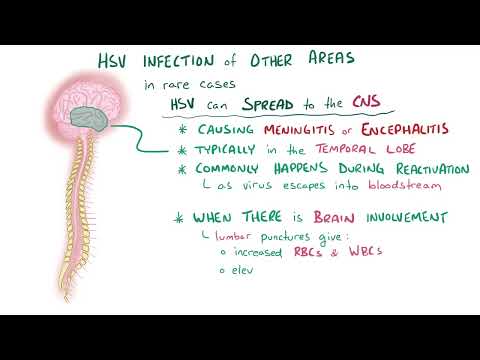 This can happen over and over again throughout a person’s lifetime, with classic triggers being things like stress, skin damage, and viral illnesses. Recurrent episodes are usually less severe than the primary infection, and sometimes there are no symptoms at all. When there are symptoms, there might be a characteristic tingling or burning sensation, called a prodrome, one or two days before the blisters appear. In oral and genital herpes, the primary infection is most often asymptomatic. Having said that, in oral herpes when it does cause symptoms it usually affects children and it causes lesions on the palate, gums, tongue, lip, and facial area, as well as a fever and enlarged lymph nodes. The lesions themselves are typically clusters of small, painful, fluid-filled blisters, that ooze and ulcerate, and then eventually heal after a few weeks. In older children and adults, a common symptom is pharyngitis. Most of the time, like primary infection, reactivation doesn’t cause any symptoms, but when it does, the most common pattern is having a handful of blisters at the vermillion border—the border of the lip—on one side of the face. These blisters are typically smaller and heal over a week. With genital herpes, primary infection can cause symptoms like ulcers and pustules which form on the labia majora, labia minora, mons pubis, vaginal mucosa, and cervix in women and on the shaft of the penis in men. Like oral herpes, most of the time reactivation doesn’t cause any symptoms, but when it does, the most common pattern is to have a few blisters that resolve rapidly in about a week. In addition to oral and genital infections, HSV can also affect other areas. When it affects the fingertip or nail bed, it’s called herpetic whitlow, and this might happen if the finger rubs up against an active lesion around the mouth or genital area. Once it affects the fingertip, it’s also easy for it to get carried over to other areas on the body to spread the infection—a process called autoinoculation. HSV can sometimes involve the trunk, extremities, or head—a pattern that’s common among wrestlers because they have a lot of skin-to-skin contact; and is therefore called herpes gladiatorum. Finally, individuals with burn injuries or with atopic dermatitis can have really serious herpes infections in those areas, the latter even has a specific name—eczema herpeticum. HSV can also affect the eye causing keratoconjunctivitis, which is inflammation of both the cornea and conjunctiva. In addition to symptoms of conjunctivitis which are pain, redness, tearing, and sensitivity to light, there can some classic signs of corneal involvement like blurry vision and a branching dendritic lesion which looks a bit like the tree-like dendrites of a neuron, which happens on the cornea itself, and this pattern is classic for herpes infection. In rare cases, herpes viruses can spread to the central nervous system and cause meningitis or encephalitis, typically affecting the temporal lobe, in individuals of all ages. These can happen from a primary infection, but more commonly happen during reactivation when some of the virus can escape into the bloodstream and reach the brain. When there is brain involvement, a lumbar puncture often has specific findings like an increase in red blood cells, increase in white blood cells, and elevated protein levels. There are also some CT, MRI, and EEG changes that can help to make the diagnosis. HSV can also pass from a mother to a baby. Rather than causing a congenital infection while the fetus is in the uterus, most of the transmission happens at birth when the baby passes through infected maternal vaginal secretions during delivery. Neonatal HSV causes three different patterns of illness each occurring about ⅓ of the time. The first is skin, eye, or mucous membrane infection, where lesions pop up 1-2 weeks after delivery typically at sites of damaged skin like the site where fetal scalp electrodes may have been attached. The second is central nervous system infection which typically causes lethargy, irritability, and even seizures 2-3 weeks after delivery and can cause some of the same lumbar puncture, CT, MRI, and EEG findings as that in older children and adults with HSV encephalitis. If not treated, both the first and second type can transition into the third type which is disseminated infection, where herpes virus causes sepsis and failure of various organs including the heart and brain. HSV can cause unique symptoms in immunocompromised individuals who tend to have more frequent reactivation, more severe symptoms, and a wider range of symptoms, like lesions in the esophagus or lungs. Herpes can usually be diagnosed based on how the skin or mucous membrane lesions look, and can be confirmed with tests looking for viral DNA, like polymerase chain reaction, an antibody response to the virus, or by growing the virus with a viral culture. Although infections typically resolve without treatment within a couple of weeks, there are antiviral drugs like acyclovir, famciclovir, and valacyclovir that can be used topically or systemically to reduce pain and speed up healing. For recurring episodes, these treatments usually work best if taken when the prodrome starts; in other words, before the blisters develop, and high-dose intravenous antivirals may be given in more severe, or life threatening situations. Alright, as a quick recap, most of the time, herpes simplex virus 1 and 2 cause asymptomatic latent infections that set up in the trigeminal and sacral nuclei for life, but sometimes they can cause symptoms like recurrent oral and genital lesions. They can also cause more severe infections like HSV keratoconjunctivitis, meningitis, and encephalitis, as well as neonatal infections which usually get transmitted when a baby passes through infected vaginal secretions. Thanks for watching, you can help support us by donating on patreon, or subscribing to our channel, or telling your friends about us on social media. .

With Product You Purchase

What is Herpes? | Can Herpes be Cured?

What is Herpes? | Can Herpes be Cured?